The Prime Minister expressed her pleasure in attending the forum and said that, currently, as the global warming is intensifying, many countries are experiencing extreme weather patterns such as record high temperatures, floods and droughts. International cooperation must be strengthened to face up to the challenges brought by climate change and energy shortage.

Last year marked the 50th anniversary of diplomatic relations between Iceland and China, as well as the 15th year since the launch of geothermal utilization cooperation. The Chinese government has made a pledge to peak carbon dioxide emissions before 2030 and achieve carbon neutrality before 2060. The Icelandic government has also proposed to reduce greenhouse gas emissions by 55% by 2030 and achieve carbon neutrality no later than 2040. Iceland is willing to further cooperate with China in the field of geothermal energy utilization and training of professionals, emissions-to-methanol, and carbon-to-solid technology, with a view to promoting Iceland-China relations and practical cooperation for greater progress.

The 2022 Taiyuan Energy Low Carbon Development Forum was held in Taiyuan, Shanxi Province from September 1 to 3, attended by about 2000 participants from both China and abroad. 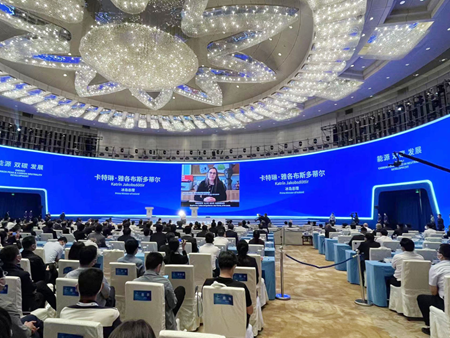