The Assistant U.S. Trade Representative for Europe and the Middle East, Christopher S. Wilson, and the acting Icelandic Minister for Foreign Affairs and External Trade, Össur Skarphéðinsson, today signed in Reykjavik a U.S.-Iceland Trade a 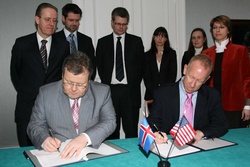 The Agreement establishes a forum for deepening and strengthening U.S.-Icelandic bilateral trade and investment relations. The forum will be led by representatives from the Icelandic Foreign Ministry and the U.S. Trade Representative for Europe and the Middle East, but the participation of private stakeholders is also foreseen. During the signing, Minister Skarphéðinsson expressed his hope that the Forum would increase and strengthen the countries´ economic relations. He also emphasized the interest of Icelandic authorities to ensure a special visa agreement with the U.S. for foreign business people and investors.

Two-way goods trade between the United States and Iceland was $835 million in 2007, with U.S. goods exports to Iceland amounting to $630 million.