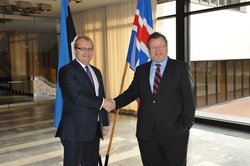 Össur Skarphéðinsson, Minister for Foreign Affairs of Iceland, met Friday with his Estonian counterpart, Urmas Paet, in the Estonian capital, Tallinn. The ministers discussed bilateral relations and security and defense issues. They also discussed the status of Iceland's accession talks with the European Union and Iceland's main interests in the negotiations. Minister Skarphéðinsson briefed his counterpart in particular about the significance of the fisheries sector for Iceland and the importance of Estonia´s support during the negotiation process.

In January 2011 Estonia will join the group of sixteen EU states who have already adopted the Euro, and the ministers discussed what lessons could be learned from the process and collaboration of small states within the EU.

Estonians have shown great support to Iceland since the collapse of the banking system in 2008, in particular with the EU-application process, and remain mindful of Iceland recognizing their independence almost twenty years ago.
In commemoration of Estonia's 20 year independence celebration next year, Icelandic artists are scheduled to participate during a special Icelandic day, on 21 August 2011.

Minister Skarphedinsson also used the occasion to meet with members of Parliament, the Committee on Friendship with Iceland, the chairman of European Union Affairs Committee and the deputy managing director of the Estonian Central Bank. Discussion centred on the status of Iceland's EU accession negotiations, Iceland's cooperation with the IMF and the government's economic plan. The Minister also visited the headquarters of Skype, which are located in Tallinn.