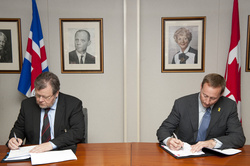 Össur Skarphéðinsson, Minister for Foreign Affairs, and Peter G. MacKay, Canadian Minister of National Defence, signed an agreement on defence cooperation yearlier today. The agreement lays a foundation for further defense cooperation between the countries, including enhanced consultation, communications, and education and training. The agreement also opens the path for further cooperation in exercises and bilateral visits.

The ministers signed the agreement in Brussels where they attended a NATO meeting of Ministers of Defence and of Foreign Affairs. Since 2006, Iceland has signed agreements on defence cooperation with Norway, Denmark, Britain, and the United States.