The 2010 budget is based on the premises set out in, and aimed at achieving the objectives of, the report on government plans for fiscal balance in 2009-2013, submitted by the Minister of Finance to the Althingi last June. 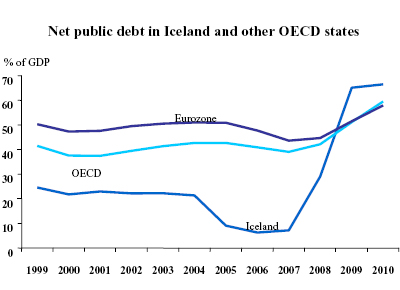 The principal objectives of the plan are clear. Firstly, that the National Treasury withstand shocks resulting from the economic collapse to maintain necessary social and welfare services. Secondly, to begin to lower the burden of debt as soon as possible, thereby reducing the interest burden which has claimed a major portion of expenditures from other important areas. 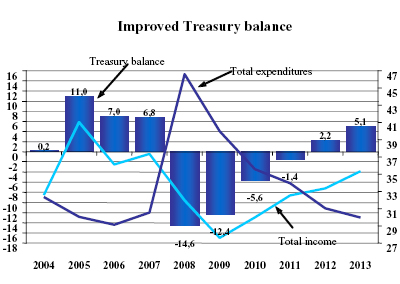 In accordance with this plan, a substantial improvement is expected in the Treasury balance in 2010, for instance, that the primary balance, i.e. excluding interest balance, will be in deficit by ISK 25.4 billion in 2010 instead of the expected primary deficit of ISK 126.7 billion this year. The overall Treasury deficit will also be lowered considerably according to the budget and is estimated at ISK 87.4 billion. This improvement directly affects cash flow from operations, which is estimated to be negative by ISK 95 billion rather than the ISK 174 billion deficit of this year.

The government is determined that the negative impact on households and welfare services resulting from restraint and cutbacks applied to public expenditure be kept to an absolute minimum, especially in the field of social services and healthcare, and that the social security of all citizens be ensured. At the same time, basic services such as school operations, will be safeguarded. For this to be possible, it is crucial that the funding allocated to public projects and services be utilised as effectively as possible. To this end, the restructuring and prioritisation of public operations will be examined thoroughly. Every potential for increasing cost efficiency and innovation needs to be exploited.

The economic forecast for 2010 upon which the budget is based assumes negative growth of 1.9% during the year, price level increases of 5.0%, a drop in purchasing power of disposable income of 11.4%, unemployment of 10.6% and a current account surplus equivalent to 0.8% of GDP.

Total expenditure in 2010 is estimated to be ISK 546 billion, compared to ISK 589 billion this year. This means a reduction in expenditure of ISK 43 billion, excluding wages, exchange rate and price level increases, or a decrease of 7.3% in real terms. 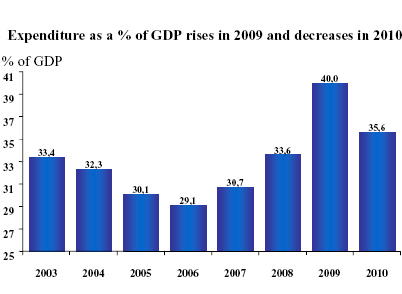 The most significant changes result from decisions by the government on numerous general and specific measures to reduce public expenditure by ISK 42.8 billion in 2010. The change in primary expenditure from the 2009 budget amounts to a decrease of ISK 21 billion at fixed prices.

Expenditure resulting from unavoidable consequences of the economic recession or various other mandatory expenditure obligations provided for by law, collective bargaining contracts or government decisions amount to ISK 21 billion in excess of the 2009 budget. The largest individual factors here are unemployment benefit expenditures of ISK 12.3 billion, called government guarantees amounting to ISK 2.3 billion and  the impact of the increase to the Social Security Tax of 1.66% on state salary expenditure, which amounts to ISK 2.2 billion.

Treasury revenues in 2010 are estimated at ISK 468.2 billion, or an increase of ISK 61 billion from the revised budget estimates for 2009. The proposed revenues are aimed at achieving the planned objective of regaining fiscal balance over the next four years. Estimated tax revenues amount to ISK 422.9 billion compared to an estimated ISK 350.6 billion for 2009.

Treasury revenues as a percentage of GDP dropped from 28.0% in 2008 to 23.8% in 2009, both as a result of lower incomes and contraction in demand, which accordingly resulted in lower income and consumption taxes. The 2010 budget anticipates that this proportion will increase to 27.07%, returning closer to levels of recent years.

The YoY change will be visible in three aspects in particular: changes in price levels and on tax bases resulting from economic developments in the coming year, full-year impact of tax increases implemented in mid-2009, and proposed tax changes required to achieve the primary balance objectives. 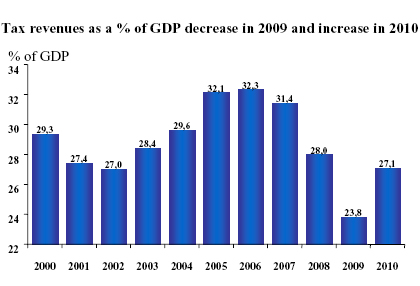 The government underlines the importance of ensuring budget credibility as it faces the prospect of a number of years when extensive restraint in government expenditure will be crucial. This credibility depends not least on the determination and ability of the government, ministries and institutions to keep Treasury expenditure within the limits of the budget. To this end the Minister of Finance will present to the government this autumn procedural rules and benchmarks to boost the reliability of the budget and reinforce its implementation.