The Treasury Budget proposal for 2014 provides balanced Treasury operations for the first time since 2007. Stopping debt accumulation and achieving balanced public sector finances are the foundations of resilience.

The key objective of the budget proposal is to ensure improved living conditions for the people of Iceland. Real disposable income will rise by 0.3% in 2014 as a result of lower taxes. In addition, pensioners will benefit from increased social security system expenditures.

Over the next three years, the payroll tax will decline by 0.34 percentage points, providing firms with relief in the amount of ISK 3.8 bn by the time the changes have been implemented in full. In the long run, the payroll tax reduction will be of benefit to wage earners and will stimulate investment in the Icelandic economy.

The main element of fiscal policy is to reduce government debt, thereby reducing interest expense. The outlook is for a fiscal deficit of ISK 31.1 bn this year. This is substantially in excess of the estimate for 2013, which assumed a deficit of ISK 3.7 bn.

In the absence of targeted action, the fiscal deficit would have totalled some ISK 27 bn in 2014. Government expenditure will be reduced as a share of GDP through broad-based streamlining measures, decisions to abandon various recent projects undertaken by the previous government, and measures to cut interest expense.

Operating performance will also be improved through revenue-generating measures – in particular, the bank tax, which will be increased and will be imposed for the first time on financial undertakings in winding-up proceedings. Payments made by firms in winding-up proceedings will total an estimated ISK 11.3 bn in 2014, and total payments will amount to ISK 14.2 bn. This provides some scope for changes in focus, in line with the new government's policy.

First steps away from increased taxation on individuals and companies

Highlights of Treasury Budget proposal for 2014

Accompanying the fiscal budget proposal are plans for decisive measures to reduce Treasury debt accumulation substantially and turn the deficit into a surplus after six consecutive years of deficit operations.

Various measures on the expenditures side of the proposal

These measures combined will reduce Treasury expenditure by ISK 23 bn. 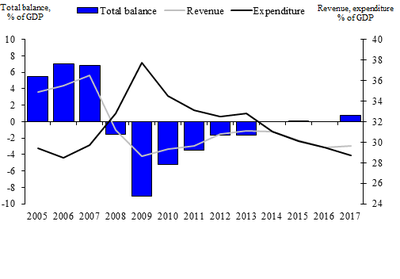 The above-described measures and estimates for the year-2014 fiscal budget proposal could produce a primary surplus of ISK 0.5 bn on an accrual basis. If the proposal is passed as is by Parliament, the Treasury Budget for 2014 will be Iceland's first balanced budget in six years. Achieving balanced public sector finances promotes increased output growth and lower domestic interest rates, which will strengthen households and firms alike.

Treasury debt is too high. It will total ISK 1,500 bn, or 84% of GDP, at the end of 2013.
Pension obligations for government employees amount to ISK 390 bn, and a plan for meeting that expense must be put into place. In addition, government guarantees for the Housing Financing Fund total ISK 940 bn. Interest expense, estimated at ISK 85 bn according to the Treasury Budget for 2013, is too high.

The 2014 fiscal budget proposal assumes that the automatic debt accumulation stemming from deficit operations will be stopped. The debt level will not rise in real terms next year, and as a share of GDP it will fall from 84% to 80%.

The cornerstone of the government's fiscal policy is the responsible handling of public sector finances, with long-term prudence and sensible utilisation of the nation's collective financial resources as a guiding principle.

In the report accompanying the budget proposal is a revised and updated plan fiscal plan for the next four years. Furthermore, it should be noted that all budget proposal materials, summaries of figures, and reports are published on the Ministry of Finance and Economic Affairs website as soon as the proposal has been presented before Parliament. The website address is: www.fjarlog.is (http://www.fjarlog.is).

It should also be noted that the national economic forecast will be presented in mid-October.

Further information can be obtained from Elva Björk Sverrisdóttir, Information Officer of the Ministry of Finance and Economic Affairs, at tel: +354 545-9200.