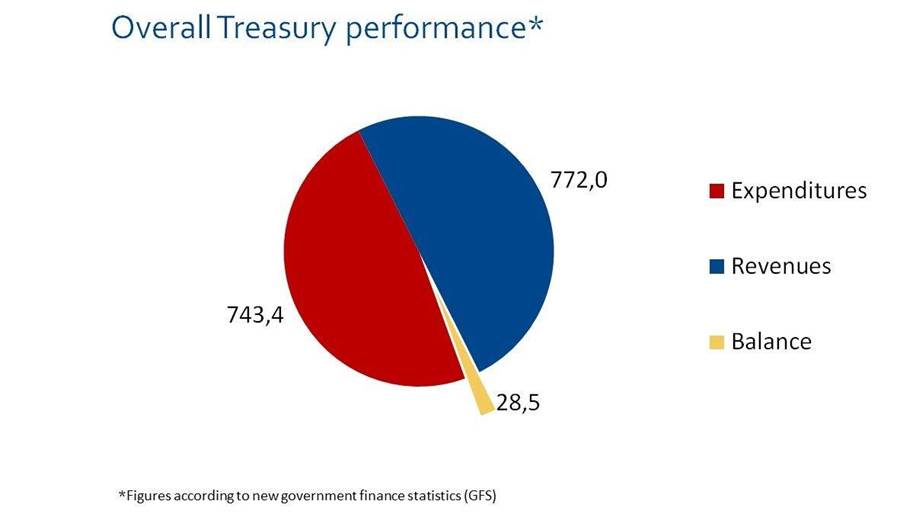 The fiscal budget proposal for 2017 has been presented before Parliament, in accordance with the fiscal strategy and fiscal plan over a horizon of five years, both of which were approved in August and are based on a new organic budget law.

The budget proposal for 2017 is based on the foundations that have been laid with the past three years' balanced budgets. The Treasury's performance has improved year by year since automatic debt accumulation was halted with the 2014 National Budget, and the 2017 budget proposal is the fourth in a row based on Treasury operations without a deficit.

The bill assumes an overall surplus of ISK 28.4 bn. This is virtually unchanged Treasury performance from the 2017–2021 fiscal plan presented last spring, or 1% of GDP.

The primary surplus is substantial, at ISK 90.9 bn.

The bill is based on the 2017-2021 fiscal strategy, approved by Parliament in August, but also takes account of the following:

In the National Budget for 2016, increased Treasury contributions have been used to strengthen and improve social welfare system services, where expenditures have grown by 5% during the year. At constant prices, primary expenditure is 7% higher in 2016 than in 2006. The fiscal plan allowed scope for special spending for operations and transfers in the amount of ISK 14 bn. Healthcare, education, and law enforcement have been given special priority.

Major expenditures according to the 2017 fiscal budget proposal

In addition, there are new and increased investment and development projects in the 2017 budget proposal, in line with the scope for investment in the fiscal plan. Among them are the following:

In recent years, the premises have been created for tax reductions and for reforms designed to enhance the efficiency of the tax system. The aim has been to simplify the tax system, reduce exemptions, and increase equal treatment. In the recent past, the following measures have supported the increase in individuals' purchasing power and have benefited households:

Prioritisation in favour of social security, healthcare, and education

In 2014 and 2015, there was moderate consolidation in primary expenditure growth. Special priority was given to increased funding for social security, healthcare, and education in the wake of strict consolidation on the expenditures side in 2009–2012. In the National Budget for 2016, increased Treasury contributions have been used to strengthen and improve social welfare system services, where expenditures have grown by 5% during the year. At constant prices, primary expenditure is 7% higher in 2016 than in 2006.

Iceland's economic reconstruction following the collapse of the banking system in autumn 2008 is well advanced, and economic forecasts for the coming years are favourable. However, there are signs of overheating in the economy, which demand disciplined economic policy and call for appropriate emphasis in overall management of public sector finances. As a result, there will still be a need for conservative policy concerning government expenditures, so as to increase the surplus and pay down debt.

With responsible economic policy and a balanced fiscal budget, it will continue to be possible to make progress towards improved living standards and further strengthening of social welfare, for the benefit of all Icelanders. This is the main substance of the fiscal budget proposal for 2017.

The fiscal budget proposal for 2017 is presented under unusual circumstances. According to Article 42 of the Constitution, the budget proposal must be presented before Parliament when it convenes. Furthermore, according to Article 1 of the Act on Parliamentary Procedure, Parliament convenes on the second Tuesday in September. This spring, it was decided to hold early Parliamentary elections this autumn, and this was done on 29 October. Since then, no Government has been formed. The Minister of Finance and Economic Affairs presents the fiscal budget proposal on behalf of the Government, and according to the Constitution, no spending may be undertaken without budgetary authorisation. It is therefore essential that authorisations for the coming year be passed before the year-end.

The budget proposal and the new Act on Public Sector Finances

In August, Parliament approved, for the first time, a fiscal strategy and fiscal plan covering a five-year horizon, on the basis of the new Act on Public Sector Finances. The strategy and plan are Parliamentary resolutions that are provided for in the Act and are to be used as a basis for budget preparation. They reflect the Government's objectives and emphases concerning the economic policy impact of public sector finances, tax policy, and prioritisation of expenditures. In the fiscal plan, expenditures are classified by function, based on existing premises and economic forecasts.

In all major respects, the fiscal budget proposal for 2017 is based on the fiscal strategy and fiscal plan approved by Parliament.