Today, Iceland served the EFTA Court with its Rejoinder in the Icesave case. In the Rejoinder Iceland responds to the arguments put foward by the EFTA Surveillance Authority in its Reply to Iceland´s Statement of Defence, submitted to the Court in early March.

This completes the 2nd round of the written procedure of this case. A 3rd round is expected to commence with the European Commission submitting its Statement of Intervention on 24 May. Written observations by any other third parties are due by 15 May.


The Reply of the EFTA Surveillance Authority

The short Reply doesn´t deal with Iceland´s case in any detail and doesn´t challenge Iceland´s account of certain key aspects of the factual background. Instead the Authority has mischaracterised Iceland´s case, it has failed to engage with the central issue raised by the Defence, and it has sought to evade the consequences of its own argument.

The Authority's claim is that the Icelandic Government is in breach of the Deposit Guarantee Directive by failing to ensure minimum compensation to depositors under the Directive. However, the emphasis of the Authority seems to have shifted from what it claimed in the original Application to the Court. According to its Reply, State funding is not required by the Directive, but not impossible. The Directive does not specify how the Deposit Guarantee Scheme is to be funded. Therefore, the Authority seems to conclude that Iceland was free to take any number of possible measures to secure the result.

In view of the Government, this position is highly inconsistent with the Application lodged with the EFTA Court. The State cannot “ensure” that a Deposit Guarantee Scheme always pays out other than with its own resources. The Authority completely ignores the economic reality that a Deposit Guarantee Scheme cannot protect in all circumstances. According to the Authority´s conclusion a heavy burden is placed on the States that is not set out in the Directive.

According to an analysis submitted with Iceland´s Defence, the findings of which are not challenged by the Authority, a system-wide banking crisis, that would force the DGS in each Member State of the EU to pay out funds corresponding to all reimbursed deposits, would on average equal 83% of gross domestic product (“GDP”). The costs though vary widely between countries, with the shortfall amounting to up to 372% of GDP. (See the chart below.)

In Iceland´s view, the Authority´s argument accordingly exposes the EU Member States to a vast potential liability, which could materialize at the worst given time, viz. in systemic financial crisis.

The consequences of such a result may prove to be exceptionally serious. Iceland contends that it would require the clearest possible language in a Directive to impose an obligation requiring State funding in a time-span far beyond capabilities of most Governments.

Iceland's Rejoinder can be found here

DGS shortfall as a percentage of GDP in the EU (2007) and Iceland. 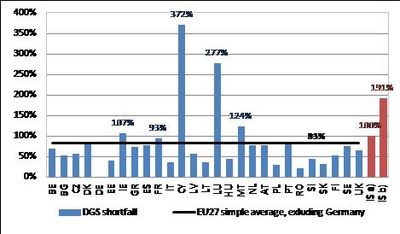