The Fiscal Budget Proposal submitted to the Icelandic parliament Althingi today is consistent with the objectives of the five-year Fiscal Plan for 2018-2022, adopted by the Althingi last June.

The 2018 Budget Proposal is the fifth in a row providing for deficit-free Treasury operations. Its principal objective is to safeguard the positive fiscal achievements of recent quarters, as the current period of strong growth appears to be among the longest since measurements began. Iceland's economic situation, the Treasury position and public sector finances are in many respects enviable by international comparison. 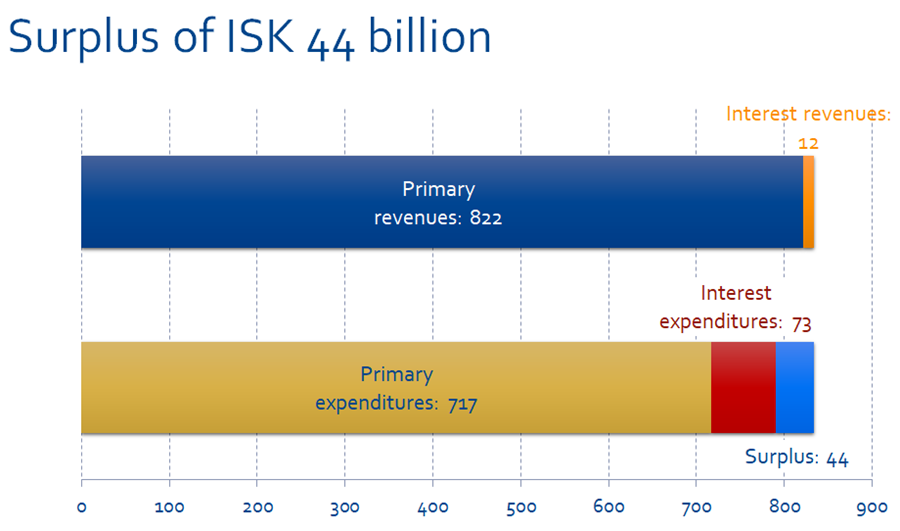 The primary balance is strongly positive, with a surplus of ISK 104 billion. While this is one billion lower than in the fiscal plan, the primary balance is practically unchanged relative to GDP, at 3.8%, which is among the highest anywhere in Europe. In contrast to the primary balance, the interest balance has improved considerably, by ISK 4.6 billion. This due for the most part to the Treasury's buy-backs of its bonds in April 2017 amounting to ISK 99 billion nominal value.

Presentation of the Budget Proposal

The Budget is based on the fiscal strategy and fiscal plan. Two documents are prepared, one is the Bill itself and the other a supplementary publication. The supplement shows how the ministries plan to use their budget allocations. For the first time now plans are set out for the two years following the budget year for institutions and projects.

Emphases of the Budget Proposal

Guaranteed income increases: persons living alone and receiving disability benefits or old-age pensions will receive monthly income of at least ISK 300,000 instead of ISK 280,000. Initial grants for construction of general housing will be ISK 3 billion, an increase of 100% from the current budget. Support for first-time homebuyers will continue. Maximum payments during maternity/paternity leave will increase from ISK 500,000 to 520,000 per month with the aim of increasing this to ISK 600,000 in the coming years. Allocations for reception of refugees will almost triple. Support systems for increasing workforce participation among persons with restricted work capacity will be further reinforced.

Improvements are made to many areas of the mental healthcare system. Primary healthcare throughout Iceland will be further strengthened as the first stage, e.g. by increasing the number of psychologists. The National-University Hospital's Psychiatric Ward for Children and Youth will be specifically strengthened and the number of psychologists in primary healthcare, mental health teams and treatment options for mental illness increased. According to the fiscal plan, allocations for mental healthcare services, including the psychiatric ward for children and youth, are to increase in stages until 2022.

The building of the new National-University Hospital (NUH) will commence in the latter half of 2018, when construction of a new treatment centre on Hringbraut will begin. Allocations for the construction of the new NUH will be ISK 2.8 billion. Work will continue with a major push to improve current NUH facilities. Expenditures for healthcare and welfare increase in total by 4.6% in excess of wage and price level developments.

The Tourist Site Protection Fund will have close to ISK 800 million at its disposal, an increase of ISK 200 million. Additional funds will be devoted to research and data gathering in travel services and support for regional marketing offices boosted substantially. Support for innovation from the Technology Development Fund amounts to ISK 2.3 billion, with a similar amount provided through tax credits for research and development. While both of these items are only slightly changed from the previous year, they have been greatly increased in recent years. Reimbursement of production costs to filmmakers changes little over the previous year and will be just over ISK 1.1 billion.

Green taxes will be levied on carbon emissions while green concessions to encourage purchases of environmentally friendly vehicles will be extended. The Climate Change Action Plan will be released soon and include a varied array of actions throughout public administration and by state institutions. Unique natural sites will be protected and developed in accordance with a plan for infrastructure development and nature protection.

A language technology programme will be launched with increased funding. The construction of the building for Icelandic studies at the University of Iceland is to get underway once more, with a substantial increase in allocations for this investment. The work will be tendered before the end of 2017 and construction is expected to commence in the first half of 2018. Allocations per secondary student will continue to increase.

Transport and other infrastructure

Almost ISK 18 billion will be devoted to road construction and maintenance. Among the largest projects are the tunnel Dýrafjarðargöng, a new section of the Ring Road at the inner end of Berufjörður and a new Westman Islands ferry. Optical cable connections will be reinforced for ISK 500 million through the project Iceland Optically Connected, and the Harbour Improvement Fund strengthened.

According to the fiscal plan accommodations and other travel-related activities were to increase from the lower VAT rate to the general rate as of 1 July 2018. The 2018 Budget Proposal proposes that travel-related activities will not be subject to the general VAT rate until the beginning of 2019. The objective of the change in the tax rate is to encourage more sustainable travel industry growth, improve the efficiency of the VAT system and harmonise the operating environment for industrial sectors to prevent the travel industry from crowding out other industries. The general VAT rate will be lowered from 24% to 22.5% at the beginning of 2019, as previously anticipated.

“With these proposals we are addressing criticisms which have been voiced in debate on the fiscal plan, in particular, how complex it is to change the tax rate twice in the space of six months. Consumers will welcome the lower VAT and Iceland will become more competitive both in terms of its living standards and business environment,” says Benedikt Jóhannesson, Minister of Finance and Economic Affairs.

In 2018 steps will be taken towards a harmonised green tax system. The carbon tax will increase and levies on petrol and diesel oil equalised. Concessions for purchases of electric vehicles, which would have expired, will be extended for three years.

Economic conditions are currently extremely favourable generally, with GDP growth above expectations. The removal of capital controls in March 2017 has encouraged a more normal pricing of the ISK, as prior to that time the strengthening of the currency could be attributed to a large extent to travel industry growth. In the light of the favourable economic circumstances and to offset to some extent demand growth in the economy, the surplus in public sector operations is expected to increase from 1% of GDP to 1.6% of GDP over the next two years.

It is important that the public sector take advantage of the favourable climate to reduce debt, rein in expenditure growth contributing to expansion, and ensure a surplus in public sector operations.

Household purchasing power has grown rapidly in recent quarters, with wage increases in recent years boosted by low inflation. Maintaining this is important. Households have used their increased purchasing power in part to reduce their debts. The employment participation rate is currently close to peak and long-term unemployment has practically disappeared.

Gross Treasury debt decreased by almost ISK 200 billion in the first half of 2017. Interest payments remain an extremely large expenditure item, amounting to ISK 73 billion in 2018, including imputed interest on pension liabilities of ISK 14 billion, while interest revenues amount to ISK 12 billion.

Debt is expected to continue to decline significantly in 2018, by around ISK 36 billion, and by 2019 public sector debt is estimated to be less than 30%.