The National Budget proposal for 2018 will be submitted to Parliament today. Owing to the unusual circumstances, the proposal is published first on the Ministry of Finance and Economic Affairs website, as the time between presentation and Parliamentary discussion is so short.

The budget proposal reflects the new Government's initial points of emphasis: to allow society as a whole to benefit from the ongoing GDP growth phase and to secure social stability, welfare, and quality of life for the future. It responds to the need for more effective funding for important social services and infrastructure while ensuring that the fiscal outcome reflects an attitude of responsibility and steadfastness. Treasury debt will be reduced further.

It is assumed that the overall Treasury surplus will be nearly 1.3% of year-2018 GDP, or approximately ISK 35 bn. This represents a significant increase from the National Budget for 2017, which was passed with a surplus of ISK 24.7 bn. The primary surplus will remain large, at about 3.5% of 2018 GDP. 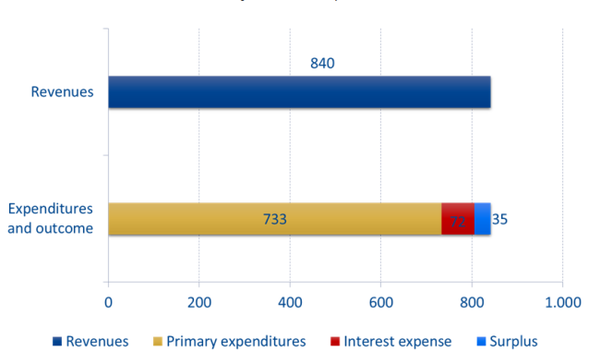 Highlights of the fiscal budget proposal

Budgetary allocations to healthcare are increased, including increased support for healthcare centres, additional dental care subsidies for disability pensioners and the elderly, and increased contributions for pharmaceuticals purchases. In addition, hospital services in greater Reykjavík and regional Iceland are strengthened – both operations and equipment purchases – and a special allocation is made for victims of sexual crimes outside the capital area. The total increase in budgetary healthcare contributions between 2017 and 2018 is just over ISK 21 bn.

Expenditures for child benefits increase by just under ISK 1 bn from the 2017 level, or from ISK 9.6 bn to ISK 10.5 bn. Funding for childbirth leave will increase by just over ISK 1 bn, and the tax-free threshold for old-age pensioners' labour income will be increased at the beginning of 2018 from ISK 25,000 per month to ISK 100,000 per month. This increases expenditures by ISK 1.1 bn.

In education, culture, and athletics, there will be considerable increases compared to the assumptions in the fiscal plan. They include the following: ISK 450 m for a language technology project, ISK 400 bn for upper secondary education, and ISK 1 bn for tertiary education. This is an element in enhancing the quality of education at these levels. The objective is to increase university funding per student-year until it is comparable to the level in OECD countries by 2020 and to the level in the other Nordic countries by 2025. In all, allocations to education, culture, and athletics increase by ISK 5.5 bn.

There will be a substantial increase (ISK 3.6 bn) in allocations for various transport and telecom projects and increase of ISK 1.7 bn for environmental affairs, including shrinking the ruling committee's caseload backlog, developing infrastructure for protection of natural and cultural relics, and funding for a campaign for protected areas and the establishment of a climate council. Furthermore, there is an allocation of ISK 90 m for river monitoring due to potential genetic contamination from sea-farmed salmon.

Allocations are also made for the protection of Iceland's interests in relation to Brexit and for expert assistance provided to party caucuses, in line with the Government's policy of strengthening Parliament.

During the electoral term, the Government's aim is to continue reducing taxes, make taxation fairer, and ensure effective tax monitoring. Emphasis will be placed on lowering income tax in the lower tax bracket during the term, and priority will be given to reducing the payroll tax. Both of these depend on developments in the labour market, and the income tax reduction will also depend on other conditions in the economy.

The main tax changes in 2018 included among miscellaneous assumptions in the fiscal budget proposal are as follows:

Even though there are a number of signs that Iceland has passed the top of the business cycle, the outlook is unusually favourable, according to forecasts. Substantial economic progress has been made in recent years, and simultaneously, public sector finances have been brought into balance and placed on a more secure footing. The task ahead is to preserve this success and extend it through synchronised monetary, fiscal, and labour market policy that promotes stability and moderate GDP growth.

Treasury debt has been reduced markedly from the 2012 peak of nearly ISK 1,500 bn. In the past few years, debt has been reduced by about ISK 400 bn, including ISK 200 bn in 2017, lowering interest expense in coming years by ISK 9 bn. Nevertheless, interest payments account for a large segment of Treasury expenditures, totalling an estimated ISK 58 bn in 2018, plus interest on pension obligations totalling ISK 14 bn. It is planned to continue paying down Treasury debt next year, to a ratio of 31.7% of GDP by the year-end. This corresponds to just under 27% of GDP based on the debt rule in the Act on Public Finances.

After significant deleveraging in 2017, debt will be reduced by another ISK 50 bn in 2018. 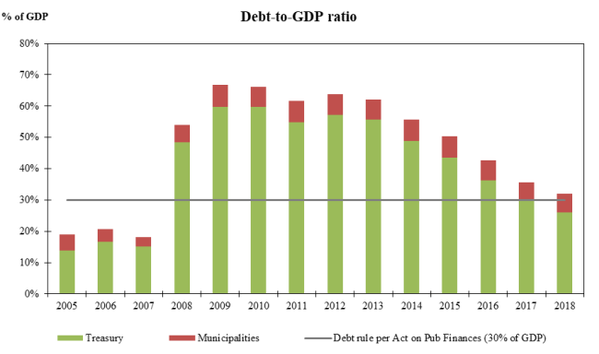 In recent years, real wages have risen much more in Iceland than in any other OECD country. The Government places prime importance on safeguarding this success and building upon it.

Cohesion in the labour market is a prerequisite for achieving price stability and general equilibrium, which creates economic conditions conducive to lower interest rates and improved standards of living. A changed framework for wage agreements will be a major determinant of whether it proves possible to maintain improved living standards for the long term. The Government therefore places strong emphasis on engaging the social partners in a collaboration on the future structure of wage negotiations.

The National Budget is based on a fiscal strategy and a fiscal plan. Two documents are presented: the budget proposal itself and a supplement. The supplement contains projections of how the ministries plan to use their budgetary authorisations. Now, for the first time, the supplement also presents projections for institutions and special projects over a horizon of two years following the fiscal year covered in the budget proposal.

All statistical materials are now published in electronic form, but work will continue on improving the presentation of data from projections and central government operations.