The National Budget proposal for 2019 is being submitted to Parliament today. It is assumed that the overall Treasury surplus will be 1% of year-2019 GDP, or approximately ISK 29bn. This is in line with the targets in the fiscal strategy (link) and fiscal plan (link), as Treasury operations have been in surplus in recent years despite a substantial increase in expenditures — particularly healthcare, social, insurance, and housing affairs.

In all, total Treasury expenditures will rise by 7% year-on-year in nominal terms, or by just over ISK 55bn, whereas total Treasury revenues will increase by nearly ISK 52bn. It is clear that this is close to the upper limit of possible spending growth. This spending growth will be addressed with regular reassessments of expenditures so as to ensure the best possible allocation of funds.

Budgetary allocations to healthcare will rise in 2019, with the bulk of the increase for the construction of the new Landspítali hospital (ISK 7.2bn in 2019). In addition, allocations for the construction and operation of nursing homes will be increased. The total increase in budgetary healthcare contributions between 2018 and 2019 is ISK 12.6bn, excluding wage and price changes. In addition, allocations to social, housing, and insurance affairs will increase by ISK 13.3bn, excluding wage and price changes.

Investment in infrastructure will continue to be emphasised. In addition to the construction of the new Landspítali on Hringbraut, it is assumed that allocations for transport will increase by ISK 5.5bn, due mainly to a special transport campaign in 2019-2021, which will be financed with temporary extraordinary dividends paid by financial institutions, as was specified in the current fiscal plan. Allocations to transport and telecommunications will be increased by 9% in 2019, to just over ISK 43.6bn.

Other large investment projects include the first contributions for the purchase of new Coast Guard helicopters, whose delivery is scheduled for 2022, and the construction of Icelandic House, the centre for Icelandic studies.

Over ISK 25bn for housing support

Support for housing is to increase by just over ISK 900m next year. The subsidy, which will total ISK 25.4bn, is provided in various ways, including housing benefits, initial contributions for apartment construction, and mortgage interest allowances. Housing support is also provided with tax benefits through the third-pillar pension savings measure and support for first-time purchases, tax exemptions for rental income, discounted stamp fees for first-time purchases, reimbursement of value-added tax to builders for the sale and rental of residential housing, and reimbursement of value-added tax to homeowners for maintenance.

Next year, work will begin on the first stages in reforming the interaction between the income tax and benefits systems, one of the Government’s policy priorities. In February, the government stated that, in connection with the review of private sector wage settlements, a review of the income tax system would begin, with emphasis on reducing tax burdens and making possible changes to both the personal deduction and the relationship with the benefits system, so as to support lower-income groups. As a result, it is proposed that, concurrent with this budget proposal, actions be taken so as to facilitate labour market negotiations.

It is proposed that the personal deduction be increased by 1 percentage point in excess of the legally mandated twelve-month rise in the consumer price index in 2019. It is also assumed that the increase in the upper tax bracket boundary be based on the consumer price index (CPI), as linking the upper tax bracket boundary to the wage index creates a certain inconsistency, in that the personal deduction and the tax-free threshold follow the CPI. This is now being addressed by linking the boundary of the upper bracket to the CPI. This will create greater equality among different income groups vis-à-vis the tax system, and individuals’ tax payments will decline by ISK 1.7bn.

Alongside the increase in the personal deduction and the linking of the upper tax bracket boundary to the CPI, child benefits will be increased significantly, or by ISK 1.6bn over and above the current fiscal budget. This represents a 16% increase between 2018 and 2019. In addition to increased amounts and reference limits for curtailing child benefits, the budget assumes a new bracket for curtailing child benefits, so as to ensure that the increase will primarily benefit low-income and lower-middle-income groups. Mortgage interest allowances will increase as well, by 13% over and above the projected outcome for 2018.

In connection with the presentation of the fiscal budget proposal for 2019, it is proposed that the payroll tax be reduced by 0.25 percentage points at the beginning of 2019, and by another 0.25 percentage points at the beginning of 2020. This translates to a combined 9.3% reduction in the payroll tax. This measure is intended to promote stability and balance in the labour market, so as to mitigate the inflationary impact of next year’s wage increases.

Even though GDP growth is easing, it remains robust, and well above the growth levels projected for most of the advanced economies in Europe. The economy is strong by most measures, as is reflected in credit rating agencies’ assessment of the sovereign. Iceland’s credit ratings have risen steadily in recent years, to the current A/A-1 and A from S&P Global and Fitch, with a stable outlook, and A3 with a positive outlook from Moody’s. The current credit ratings are based on high national income, strong institutions, a good standard of living, and a sound business environment. 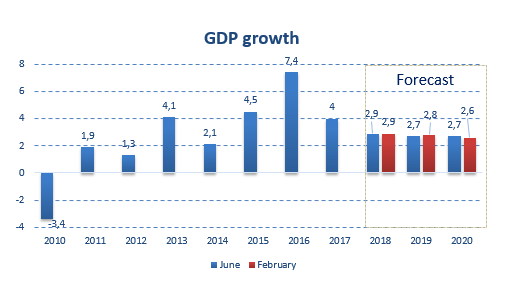 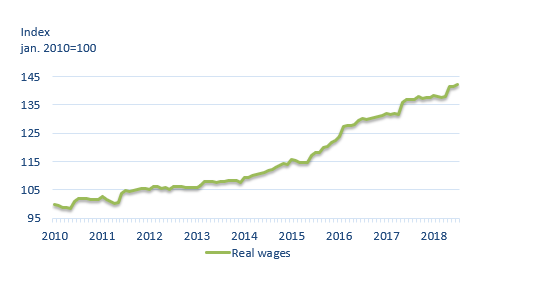 Treasury debt has fallen rapidly in recent years. Total debt has declined by ISK 658bn in six years, and the debt-to-GDP ratio has fallen from the 2011 peak of 86% to 31% as of the end of this year. From mid-2017 through mid-2018, Treasury debt declined by ISK 88bn, which translates to a reduction of ISK 10m per hour. Because of these measures, Treasury debt will fall below the reference in the fiscal rule in the Act on Public Finances for the first time in 2019. The outlook is for net interest expense to be ISK 26bn lower in 2019 than in 2011. 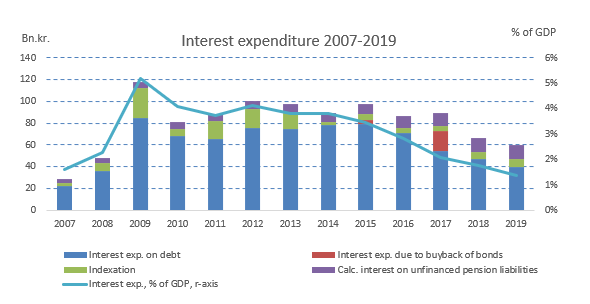 In addition to the reduction in Treasury debt, large amounts have been paid on pension obligations, which increases long-term fiscal sustainability and helps prevent current generations from raising their standards of living at the expense of future generations. The planned establishment of a Sovereign Wealth Fund by statute at this legislative session, with the intention of collecting dividends from energy resources, can support this fiscal sustainability goal.

The National Budget is based on a fiscal strategy and a fiscal plan. Two documents are presented: the budget proposal itself and a supplement. The supplement shows, among other things, the distribution of budgetary authorisations among Part A entities, projects, and a reserve fund for functions.