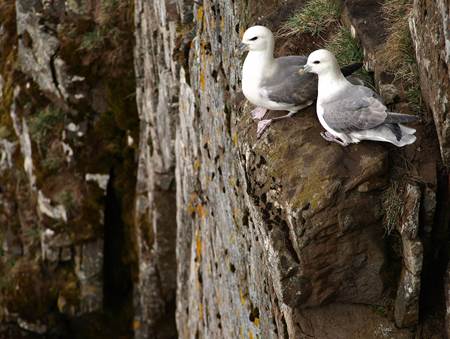 The fauna of Iceland numbers thousands of species. Research show that most species living in Iceland seem to have arrived almost exclusively from Europe, with a few exceptions from North America.

The Icelandic birdlife is in many ways unique. A total of 75 bird species regularly nest in Iceland, and several others occasionally choose to breed here. A total of 121 important bird areas (IBAs) of international significance have been identified in Iceland, most of which are seabird colonies.
There are only several land mammals living wild in Iceland. In fact, the Arctic fox is the only species of land mammal native to Iceland and is believed to have lived on the island since the last Ice Age. However, marine mammal fauna is richer and more diverse than the terrestrial one and include several species of seals and whales.

More than 2,000 freshwater and terrestrial animal species live in Iceland, and over 2,500 marine animal species have been found in Iceland’s exclusive economic zone. However, there are certainly many more as large areas of species diversity in Icelandic waters remain to be studied.

Icelandic vegetation is characterised by low-growing plant species and a relatively small number of wild vascular plants as only 25% of the island is vegetated.