The Government of Iceland strongly condemns Russia's illegal invasion of Ukraine and stands in full solidarity with Ukraine and it's people.

Iceland stands in full solidarity with its allies and close partners in supporting Ukraine and aligns itself completely with EU sanctions imposed on Russia in response to the invasion. Iceland supports United Nations agencies and other international organisations providing humanitarian assistance on the ground with financial contributions. Unprecedented steps have been taken in Iceland to welcome refugees from Ukraine.

The Alliance's decisions can entail an increased presence of its forces in member states, especially in the eastern part of the Alliance. Iceland will endeavour to fulfill its commitments towards the Alliance in this regard, in accordance with Iceland's National Security Policy.

Icelandic authorities will limit meetings and other relations with representatives of the Russian Federation in bilateral, regional and multilateral settings. This is done in close consultation with allies and close partners.

The members states of the Arctic Council, excluding Russia which currently chairs the Council, published a statement on 3 March condemning Russia’s unprovoked invasion of Ukraine. In light of Russia’s flagrant violation of international law, representatives of these states will not travel to Russia to attend Arctic Council meetings. Furthermore, they will temporarily withdraw participation in any meetings of the Council or its subsidiary organisations.

Russia‘s participation has been discussed in numerous international organisations of which Iceland is a member. Russia has already been temporarily suspended from several of them, including the Council of Europe, the UN Human Rights Council, the Council of the Baltic Sea States, the Barents Euro-Arctic Council and the Northern Dimension. The Nordic Council of Ministers has also decided to stop all cooperation with Russia and Belarus.

The Organisation for Economic Co-operation and Development (OECD) has formally terminated the ascension process with Russia and excluded Russia and Belarus from participation in projects and frozen unused payments related to their participation. The Organization for Security and Co-operation in Europe (OSCE) has invoked the Moscow Mechanism, establishing an expert mission by ODIHR to investigate possible war crimes and other human rights violations. At the International Criminal Court (ICC), Iceland was among 39 states to refer the situation in Ukraine to the ICC’s prosecutor. The prosecutor has begun investigating possible war crimes and other crimes against humanity.

A resolution demanding that Russia immediately end its military operations in Ukraine was adopted by the United Nations General Assembly on 2 March.

How can I help?

There is a lot of goodwill in the community due to the situation in Ukraine and its neighbouring countries that have received refugees from Ukraine. Information on how individuals can support Ukraine in the best possible way can be found below.

Currently, direct financial contributions from the public are more helpful than equipment and supplies. It is therefore recommended that those wishing to contribute to aid organizations and others due to the situation in Ukraine consider financial donations to the United Nations agencies and NGOs already on the scene.

Here is information on individual Icelandic NGOs in collaboration with the Ministry for Foreign Affairs:

Other NGOs that raise funds for Ukraine:

Shipments that have not been directly requested run the risk of blocking shipping routes for priority shipments. It is therefore not desirable to start shipping supplies or equipment on your own unless the receipt and disposal of the supplies has been ensured in advance by the recipient. Shipments of various goods are already piling up in aid centers in Ukraine’s neighbouring countries.

Do you have a house, an apartment or any other suitable housing for refugees coming to Iceland, fleeing the current situation in Ukraine?

The Multicultural Information Centre manages the registration of housing that will be offered to refugees.

Icelandic authorities are working hard to organize all aspects of relief efforts. Iceland is a member of the European Union's Emergency Response Coordination Center (ERCC), which plays the coordinating role of emergency aid for Ukraine and its neighbouring countries. Great emphasis is placed on countries to provide organized assistance that is carefully prioritized. The Department of Civil Protection and Emergency Management is Iceland's liaison with this cooperation and is responsible for coordinating it in Iceland.

Independent NGOs are also working hard to provide assistance through the organized resources and connections these organizations have internationally.

Iceland's total humanitarian aid contributions to Ukraine amount to one billion ISK, or about €7.2 million. The focus of Iceland’s humanitarian assistance has been on collaboration with key priority partners such as the UN and ICRC with a strong focus on providing flexible funding, allowing partners to prioritize where needed during the crisis response.

On February 28, the government announced €1 million in humanitarian aid for Ukraine, evenly divided between the International Red Cross (ICRC), the United Nations Coordination Office for Humanitarian Affairs (OCHA) and the United Nations High Commissioner for Refugees (UNHCR). These institutions aim to provide life-saving assistance within Ukraine as well as in neighbouring countries.

On March 25, the Prime Minister announced 150 million ISK – just over €1 million – in additional contributions to humanitarian operations. Of these contributions, a 50 million ISK donation had previously been announced to the United Nations High Commissioner for Refugees (UNHCR) in response to infrastructure pressures in Moldova due to the arrival of refugees from Ukraine.

At the High-Level International Donors’ Conference for Ukraine which took place in Warsaw 5 May, the Prime Minister announced a near doubling of Iceland's support for Ukraine with an additional contribution of 425 million ISK, or €3 million. The donation is divided into 295 million ISK in new humanitarian contributions and an additional 130 million ISK to the World Bank's plan for economic emergency assistance to Ukraine.

Iceland fully supports and participates in the European Union (EU) sanctions regime following Russia‘s military aggression against Ukraine. EU sanctions are adopted into Icelandic law by regulations with a basis in the Act on the Implementation of International Sanctions No. 93/2008, following a domestic review.

Iceland has already adopted all five packages of EU sanctions into national legislation.

For more information on EU sanctions following Russia’s military aggression against Ukraine, see the website of the European Commission.

If you are fleeing the war in Ukriane or are in contact with refugees who want to come to Iceland, you are referred to the Directorate of Immigration’s information page, available in English and Ukrainian. It contains the latest information for people from Ukraine who intend to come to Iceland.

The Minister of Justice has decided, following local and international consultations, to immediately activate Article 44 of the Foreign Nationals Act No 80/2016, in light of the mass flight following the Russian invasion of Ukraine. This decision is taken in keeping with the EU’s decision to initiate the same kind of action, as provided for in Directive 2001/55/EC on temporary protection in the event of a mass influx of displaced persons. The reception of refugees in Iceland will cover the same defined groups as determined by the EU. This method is first and foremost intended to make it possible to aid those who flee from Ukraine swiftly and effectively, namely by granting them temporary protection, without the reception and aid overwhelming Iceland’s protection system.

The Refugee Committee has been tasked with closely monitoring developments concerning people fleeing Ukraine, both in consultation with the Nordic countries, other European countries, and the United Nations High Commissioner for Refugees, as well as monitoring the situation at the country's neighbouring borders.

The Ministry of Social Affairs and Labour has appointed a special action team on the arrival of refugees from Ukraine. The team oversees operations and organizes the reception of people from Ukraine.

The Government of Iceland has decided to specifically welcome up to 140 especially vulnerable refugees from Ukraine and lighten the load of Ukraine’s neighbouring countries, which have received high numbers of refugees since the invasion began. With this decision, Iceland will welcome up to 100 refugees who have fled to Moldova and five to seven disabled children and their families who have fled to Poland. Furthermore, Iceland will receive sick and injured individuals and their close relatives.

On 27 February, Iceland closed its airspace to Russian air traffic. The restriction entails that all aircraft owned, chartered or operated or otherwise controlled by citizens of the Russian Federation and all operators holding air operator certificate (AOC) issued by the Russian Federation are prohibited to enter, exit or overfly Icelandic airspace. The Icelandic airspace is approximately 180,000 square kilometres. 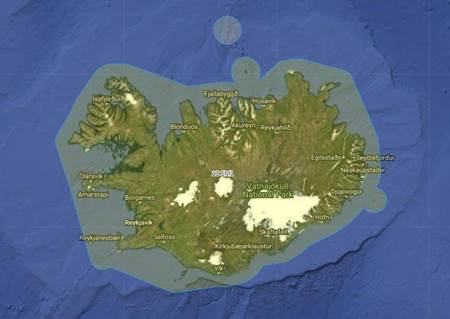 Picture: The airspace of Iceland

The consular services of the Foreign Ministry have been in regular contact with Icelandic nationals, their spouses and children located in Ukraine. The foreign service does not have staff in Ukraine and thus limited resources. Consequently, Icelandic nationals in Ukraine may be better able to assess their own security situation.

Icelandic nationals in Ukraine are advised to ensure their travel documents are up to date, check on certificates, such as birth certificates and/or marriage certificates, and bring them along. Ukrainian nationals are exempt from the requirement of having a visa to enter the country. They can stay for up to 90 days in the Schengen area without a visa.

Icelandic nationals in Ukraine are advised to monitor media coverage of the conflict and travel advice issued by trusted sources. Links to travel advice from other Foreign Services can be found here (in Icelandic). In most cases they have people on the ground and can give more detailed information.

Cargo flights in aid of Ukraine

In response to calls by Ukrainian authorities, the Government of Iceland has chartered cargo planes to fly supplies and equipment to destinations near the Ukrainian border for use in Ukraine.

Suspension of visa facilitation for Russian officials, business people and others

Iceland has made a EUR 200,000 contribution to NATO’s Trust Fund for Ukraine Professional Development Programme.

An exemption for Russian trawlers to land and transship fish in Icelandic ports has been revoked. Icelandic law prohibits foreign ships from docking in Icelandic ports and receive servicing if the ship fishes from or processes catch from shared stocks that Iceland has not made an international agreement on harvesting. Under the law, exemptions can however be granted and Russian trawlers fishing redfish have enjoyed such an exemption since 1999. This exemption has now been revoked.