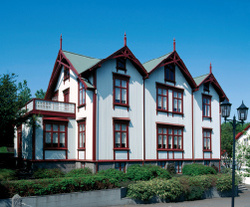 The Minister's Residence at Tjarnargata was originally built at Sólbakki in Önundarfjördur (in the Westfjords) in 1892, by the Norwegian whaler Hans Ellefssen. At the beginning of the 20th century, he sold the house to Hannes Hafsteinn, the first Minister of Iceland, for a token amount, some say ISK 1, while others say ISK 5. The house was then taken apart, transported to Reykjavík and rebuilt in its present form in 1906. The Ministers of Iceland lived in the house until 1943. Since then, it has been used for Ministers meetings and various official receptions.

The house at Solbakki was originally a cellar, main floor and an attic with one dormer window on each of the longer sides. However, when the house was rebuilt as Minister´s Residence at Tjarnargata, an additional floor was added and three dormer windows were constructed on the front.

The Minister's Residence at Thingvellir 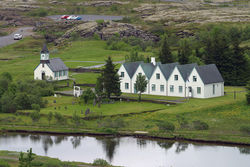 The Thingvallarbær is the official summer residence of the Prime Minister. It is, moreover, used for receptions held by the Ministry. The building, which was designed by Gudjón Samúelsson architect and built for the Althingi millennium celebration in 1930, initially had three gables and a turf roof. It was for the most part used as the residence of the national park warden and as a residence for the local priest. In 1974, two gables were added on the south end. These became the official summer residence of the Prime Minister until the Ministry acquired the entire building.

Originally, the Thingvellirbær had three gables. Before the 1100th anniversary celebrations in 1974, two more gables were added as the summer residence of the Prime Minister.