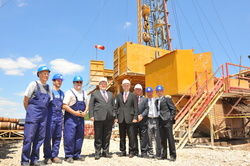 Össur Skarphéðinsson, Minister for Foreign Affairs of Iceland, met this morning with János Martonyi, Hungarian Foreign Minister and Pal Schmitt, Speaker of the Parliament and newly elected president. Today marks an end to a three day official visit of the Icelandic Foreign Minister to Croatia and Hungary.

In their meeting Ministers Skarphedinsson and Martonyi discussed the process of Iceland's forthcoming negotiations with the EU. Hungary will hold the presidency of the EU Council in the first half of 2011.

Skarphedinsson and Martonvy discussed the bilateral relations between the countries and economic issues, including the measures taken by the Icelandic government when dealing with the aftermath of the banking collapse in 2008.

The Ministers also welcomed the cooperation between Iceland and Hungary on geothermal-issues and agreed to further this cooperation. Yesterday, Minister Skarphedinsson laid the cornerstone of a new geothermal-plant in Szentlorinc which is designed by Icleandic Mannvit engineering.