This week, the Treasury of Iceland and the Central Bank of Iceland will make repayments in the amount of 171 b.kr. on loans taken from the International Monetary Fund (IMF) and the Nordic countries in connection with the IMF-led Stand-By Arrangement (SBA).

These transactions will bring the total repayments to 53% and 59%, respectively, of the loans originally extended to Iceland by the IMF and the Nordic countries under the SBA.

The decision to make the payment comes in the wake of the Treasury's international bond issue in the amount of USD 1 billion (125 b.kr.) this May. The bond issue confirms Iceland's access to foreign capital markets and gives the authorities the flexibility to repay other shorter-term loans taken under the SBA. This week's repayment to the IMF covers loans maturing in 2013 and 2014, and the payments to the Nordic countries cover loans maturing in 2016, 2017, and 2018.

The decision to make the payment was also made in view of the Treasury and the Central Bank's relatively strong near-term foreign currency liquidity position.

The original loans from the IMF and the Nordic countries amounted to 3.5 billion euros, or 558 b.kr. at the current exchange rate. The bond issue and repayment do not affect the Treasury's net debt, but they increase gross debt by approximately 2.6% of GDP, as a portion of the borrowed funds are used to pay down debt recognised in the Central Bank's accounts. Iceland's external debt position is reduced by approximately 2.6% of GDP as a result, but the net debt position is unchanged.

The maturity profile of Treasury and Central Bank foreign debt can be seen in the chart here below. 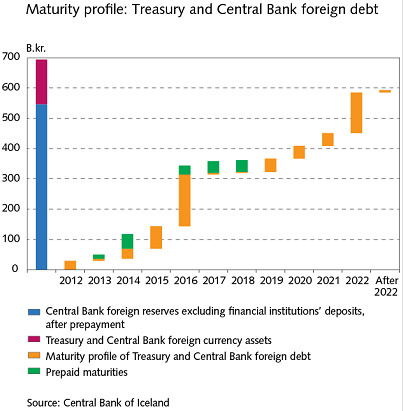