The results of Government Accounts for 2013 have now been published and the accounts forwarded to the Althingi.

Revenues in 2013 were ISK 31.7 billion higher than estimated and expenditures ISK 12.8 billion in excess of estimate. The primary balance for the year is positive by ISK 57.2 billion while the budget estimated a surplus of just over ISK 36 billion. The deviation from the budget is to a great extent the result of irregular items, the largest of which was recognised income of ISK 24.9 billion due to the increase in the value of the Treasury's holding in Landsbankinn hf. and ISK 11.9 billion higher write-downs of tax claims than estimated. Net borrowing requirement in 2013 was equivalent to 1.7% of GDP compared to 3.6% of GDP in 2012. It was funded in 2013 by reducing cash and cash equivalents, which decreased by around ISK 79 billion during the year. The Treasury's liquidity, however, remains strong, with cash and cash equivalents amounting to ISK 404 at year-end.

Among the first countries to endorse Government Accounts electronically

For the first time this year Government Accounts were electronically signed, making Iceland among the first countries to endorse its Government Accounts in this manner.  “This is a major step forward in e-government, and in keeping with the times, where people are constantly moving,” says Minister of Finance and Economic Affairs Bjarni Benediktsson.

The Ministry of Finance and Economic Affairs, the Director General of the Financial Management Authority and the Auditor General all endorsed the Government Accounts with electronic signatures, using digital certificates. Over the next few years the use of electronic ID is to be greatly increased in Iceland, to make this the principal means of identification for various types of electronic services and Internet transactions.

The advantages of endorsing annual financial statements or other documentation electronically are undisputed. It brings time savings and ensures the secure preservation of data.

“In introducing electronic signatures public administration is moving towards the future, saving both paper and effort. Holders of electronic ID can use this to sign wherever they are in the world,” the Minister of Finance pointed out when presenting Government Accounts at a press conference today. 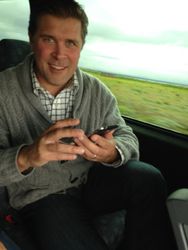 In addition, at this meeting the Minister officially opened a new web of the Financial Management Agency, www.rikisreikningur.is, which is intended to facilitate access to each year's Government Accounts. The web provides a breakdown of state revenues and expenditures from 2004 onwards.

The data can be viewed in various ways. Besides the general summary presented, a more detailed examination is possible right down to keys by types of expenditure.

The web also allows viewers to compare various state expenditures, e.g. by institution and year, in a more accessible manner than previously.

“I welcome this step towards improved public access to financial information on the state. It increases transparency and confidence and gives people an opportunity to see how state expenditures have developed,” Bjarni Benediktsson concluded.

Government Accounts in their entirety, with the accompanying breakdown and notes are accessible on the website of the Financial Management Agency [fjs.is].