This month NATO Exercise Trident Juncture 2018 takes place in Iceland, Norway, Sweden, and Finland. As an integral part of Trident Juncture, several activities took place in Iceland last week with the participation of some one thousand troops, leading up to the main part of the exercise in Norway. Up to 50,000 troops from more than 30 NATO member and partner nations are expected to participate in the main part of the exercise starting on October 25.

On October 16th, top Icelandic and US officials commemorated the Battle of the Atlantic, a battle that is widely considered a turning point in the Second World War. On a ceremony aboard the Icelandic Coast Guard Vessel Thor, Foreign Minister Gudlaugur Thor Thordarson and Admiral James G. Foggo, Commander of NATO’s Joint Force Command Naples and US Naval Forces in Europe and Africa, jointly laid a wreath into the sea to honour all those who lost their lives in the Atlantic during the war. 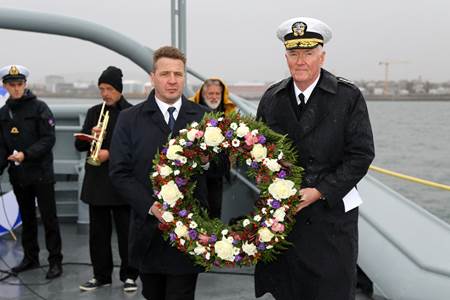 “The Battle of the Atlantic was one of the most important battles of the Second World War. The Allies would hardly have won the war without gaining superior position on the ocean. This battle was not without sacrifices and we are remembering that today. However, at the same time we also remember how crucial unimpeded shipping routes over the Atlantic are for Iceland. That was certainly the case 75 years ago and it still applies today, “ said Gudlaugur Thor Thordarson, Iceland’s Minister for Foreign Affairs.

On October 17th, around 120 US Marines landed at Keflavík Air Base on helicopters from USS Iwo Jima, which was then just off the coast of Reykjanes Peninsula. The Marines practiced securing the airfield and key infrastructure, in cooperation with the Special Intervention Unit of the National Commissioner of the Icelandic Police.

Later that day, the Icelandic Coast Guard (ICG) and the Danish Joint Arctic Command conducted a successful search and rescue exercise at Faxaflói Bay. TF-LIF, one of ICG’s helicopters, the Danish frigate Hvidbjørnen and Challenger maritime patrol aircraft were used for the exercise. 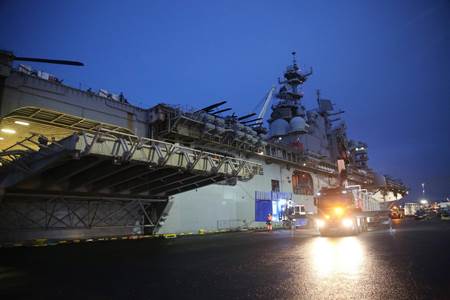 Ten naval vessels docked in Reykjavik Harbour over the weekend for a pre-sail conference, bringing the fleet under the command of Naval Striking and Support Forces NATO. Around six thousand troops from the US, UK, Canada, Denmark and France were onboard the vessels. On October 20, one of those ships, USS Iwo Jima, was open to the public. Around 2000-3000 people visited the ship.

At the same time, on October 19th and 20th, US marines conducted cold weather training in Thjórsárdalur valley, South Iceland. 400 marines took part in the exercise each day.

The fleet left Iceland on October 21 for the main part of NATO Exercise Trident Juncture 2018 in Norway.